Margherita pizza, the pizza of Queens

STORIES, INFORMATION AND INTERESTING FACTS ABOUT MARGHERITA PIZZA, PROBABLY THE MOST FAMOUS TYPE OF PIZZA. LET’S FIND THE MOST TRADITIONAL NEAPOLITAN PIZZERIAS TO ENJOY ITS ORIGINAL FLAVOR.

Not many people know that ‘Margherita’, the queen of pizzas, derives its name from that of a queen in flesh and blood: Margherita of Savoy. Taking advantage of the precious collaboration of the True Neapolitan Pizza Association, let’s deepen the knowledge of what is probably the most famous Neapolitan specialty in the world. Let’s examine its history and how it’s prepared. Let’s find the most traditional pizzeria to taste its original flavor.

The history of Margherita Pizza. 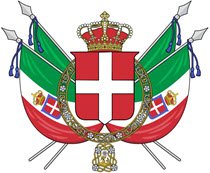 Naples, the month of June 1889, the cook Raffaele Esposito was commissioned to make some pizzas for King Umberto I of Savoy and Queen Margherita visiting the city. Among the different types offered (*1), the royal couple enjoyed one in particular, seasoned with tomato, mozzarella cheese and basil. Probably not by coincidence, its colors were red, white and green: the same as the Italian flag. When asked for the name of this delicacy, Raffaele had no hesitation: the great love for his Queen and a certain amount of cunning made him say “Margherita!”. The most famous Neapolitan pizza was officially born. (*2).

Notes:
*1: To be precise, three types were offered: the ‘Mastiuncola’ (made with lard, grated cheese, olive oil, pepper and basil), the ‘Marinara’ (mad with olive oil, tomato and garlic) and the future ‘Margherita’.
*2: It seems there is an official document certifying what happened, signed by Camillo Galli, Royal House Representative.

In Naples, well before the Savoy, another great royal family, the Bourbons, enjoyed pizza very much. King Ferdinand of Bourbon had such a passion for it to order the construction of a pizza oven at the Capodimonte Royal Palace.
The famous Neapolitan writer Salvatore Di Giacomo tells us about a party in which the Queen, Maria Carolina of Austria, together with her court ladies, ate some pizzas cooked using the King’s oven (*1):

“Being Ferdinand on a holiday in Capodimonte … The oven was built in the woods surrounding the Palace … The pizzas were ready at midnight: the Queen arrived a few minutes later, with four or five court ladies. Some other people arrived: Don Domenico counted twenty of them. 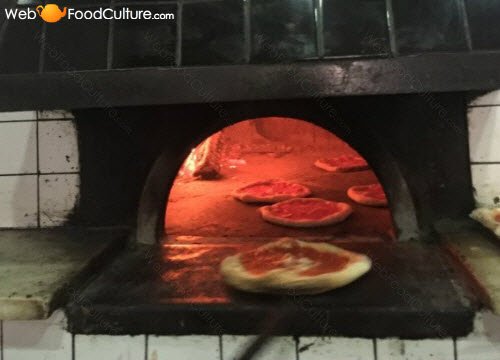 The Queen and her ladies enjoyed the pizzas, they all looked very happy. The servants poured the white wine and offered some oranges.
The dances at the Palace started and the vision faded.” (S. Di Giacomo)

What is Margherita pizza?

In February 2010, the European Union assigned the STG (Specialità Tradizionale Garantita) label to Neapolitan pizza. This label certifies compliance with specific policy and thus guarantees the quality of the product.

The ‘true Neapolitan pizza’ is defined as a:

“Food preparation, consisting in a base of dough, seasoned and baked in a wood oven”

The set of rules specifies, for example:

The method to make the dough (including its leavening).

The method to shape the dough, the ‘formatura’: this must be performed by hand, it’s not possible to use a rolling pin or any other mechanical tool.

The cooking procedure. This even includes the explanation of how a pizzaiolo should use the paddle to turn the pizza in the oven. 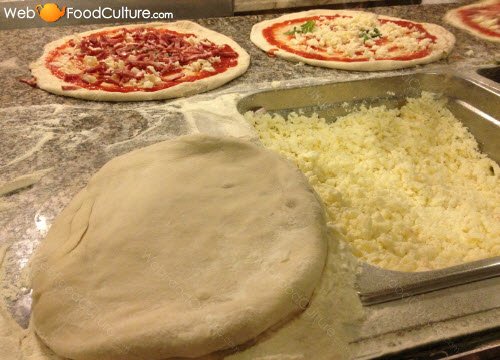 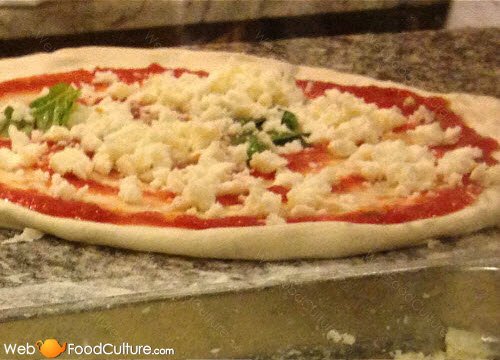 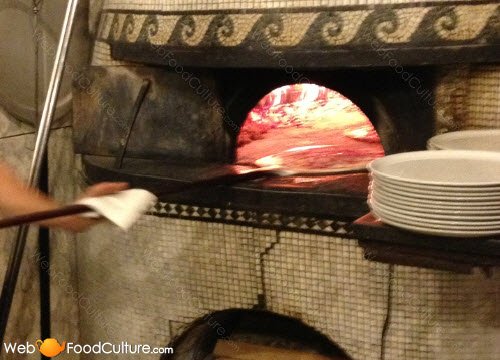 The result should consist in:

A yeasted flatbread, round-shaped, with a diameter no greater than 35 centimeters and a puffed up crust.

According to the procedural guideline for the ‘true Neapolitan pizza’ (‘verace pizza napoletana’), only the following ingredients can be used:

Ingredients for the dough:

Ingredients for the seasoning:

Given these ingredients, just two types of pizza can be considered ‘true Neapolitan pizzas’:

The ‘Marinara’: seasoned with tomato, garlic, oil and oregano;

A particular type of wood oven must be used to cook the original Margherita pizza. It looks very much like an ice igloo. The roof of its internal chamber, the ‘volta’, is entirely coated with refractory material to keep the heat. The cooking surface (‘piano di cottura’) is made with the same material. The fire is generally put out very rarely. The oven has a small arc-shaped opening that can be closed with a metal door. The smoke produced by the combustion is vented outside the structure through a chimney.

The nutritional values of pizza depend on the ingredients used in its preparation. In the case of Margherita pizza:

The dough, made with 00 flour, contains mainly carbohydrates.

Mozzarella cheese contains above all fats and mineral salts (calcium).

It’s quite difficult to determine exactly the caloric content of a Margherita pizza since this depends much on the size of the pizza itself, the quantity of the topping and the amount of the seasoning. Keeping this in mind, it’s possible to say that, on average, 100 grams of this specialty contain 250 / 270 kcals. Since the average pizza weighs three hectograms, the total is about 750 / 810 kcals. In this regard, it’s important to stress the fact that most of these calories come from the carbohydrates in the dough.

Studying the origins of food is like traveling in time: it makes possible to know better some of the greatest personalities of the past. Finding out what they ate, they become ‘more human’ and thus closer to us.

The Queens of pizza: Margherita of Savoy.

Margherita Maria Teresa Giovanna of Savoy was born in Turin in 1851, daughter of Ferdinand of Savoy and Elisabeth of Saxony. During her childhood she received a strong Catholic education: this probably explains her great religiosity and the conservative political attitude.
In 1868 she married Prince Umberto of Savoy. During the period between 1869 and 1870, the couple lived in Naples, most probably to improve the relations with its people, still very attached to the previous ruling dynasty, the Bourbons. In this city, Margherita gave birth to her first and only child.

In 1878 Umberto was crowned and she became the first Queen of Italy (*1). Great was her influence on the husband’s decisions, even if, at least officially, her role was limited to organizing public events. Thanks to her regal aspect and great communication skills she was deeply loved by her subjects, despite her reactionary political views.
After the death of Umberto, killed by an anarchist, her son became King as Vittorio Emanuele III. Fervent nationalist, she supported the advent of fascism, considered the only effective defense against the rise of the Bolsheviks, a huge menace to the monarchy.
Margherita died in Bordighera in 1926.

Note:
*1: The wife of Vittorio Emanuele II, first King of Italy, died before the unification of the country.

Only the most traditional specialties and the historical restaurants.

The Queens of pizza: Maria Carolina of Austria.

Maria Carolina was born in Vienna in 1752, daughter of Maria Theresa of Austria and elder sister of the famous Marie Antoinette.
When she was just sixteen, she moved to Naples to marry King Ferdinand of Bourbon. Very soon she proved to be much smarter than her husband, unfit for his role and became the de facto ruler of the realm. Initially influenced by the ideals of Illuminism, she guided the country as an ‘enlightened monarch’, renewing the economy and working with many of the most important intellectuals. She even approved several laws in favor of women.
Everything changed when, during the French Revolution, Marie Antoinette was beheaded: her progressive political attitude died together with her sister.
When Napoleon’s army invaded the Italian peninsula, Maria Carolina was forced to seek refuge in Sicily, under the protection of the British soldiers. At the end of the French domination, she could not go back to Naples: the same British authorities she was allied with forced her to renounce to the throne and to move to Vienna, where she died years later at the age of 62.

Naples, the city of Margherita pizza.

Naples, the ‘city of the sun’, is the county seat of the Italian region of Campania. Its origins date back to the 8th Century BC.

Where to eat the original margherita pizza.

Here follows a short list of some of the most traditional Neapolitan pizzerias: the right places to taste a delicious Margherita pizza, prepared following the original recipe.

ONLY THE MOST TYPICAL AND TRADITIONAL FOOD & WINE

The original Margherita pizza is made with just a few ingredients:

It’s not so easy to make the true Margherita pizza. The ingredients have to be fresh and of great quality. The ‘pizzaiolo’ has to be very good to work the dough and to follow the cooking. A particular type of wood oven is needed.
Here follows a video showing the procedure:

The quality of mozzarella is fundamental to make the original Margherita pizza. Only a few types can be used:

A song dedicated to pizza is probably the best choice to accompany the reading of this article:

Note: join Spotify and listen to the full song.

Margherita pizza is the final result of an evolution lasted for centuries. Evolution started with the preparation of the first flatbread, continued with the invention of mozzarella cheese, and ended with the discovery of a vegetable in the New World: tomato. All these ingredients are like pieces in a sort of ‘food puzzle’, a puzzle completed in Naples with the making of the first pizza.

“THE TRUE NEAPOLITAN PIZZA HAS NO INVENTORS, FATHERS NOR MASTERS: IT’S THE FRUIT OF THE GENIUS OF THE NEAPOLITAN PEOPLE.” (Antonio Pace)

The most expensive pizza.

In May 2010 a programmer paid two pizzas using a brand new type of electronic currency, known as ‘bitcoin’. In time, its value has risen sharply. Nowadays, the amount he paid is worth 6 million dollars: 3 million for each pizza!

What to drink with a Margherita pizza? A good choice is a beer, quite soft, medium warm, quite fresh and medium sparkling.

The softness balances the acid tendency of the tomato.

The alcohol balances the greasiness of the olive oil.

The acidity and the effervescence balance the sweet tendency of the dough.

The images bearing the logo ‘webfoodculture’ are copyrighted.

The following images are public domain:

These images are made available under the Creative Commons Attribution-Share Alike Attribution 3.0 Unported
cc-02 – Coat of arms of the Kingdom of Italy, 2010, image owner: Flanker (Wikipedia Link)

The header image is pubblic domain:

(*) The copyright of this image has expired.
(**) Image released in public domain by its author.